Have you ever seen someone with a broken leg, on crutches playing first base?  Have you ever seen a police officer announce a backyard baseball game over his loud hauler?  Have you ever seen 22 people make time stand still with only a bat, a ball, and the diamond?   If you can answer yes to all of these questions, then you must have witnessed the greatest game ever played.   For those that have no idea what I’m talking about, allow me to share with you the story of how a small group of people made the world stand still for one afternoon and how we arrived at that place in our lives in the first place.

February 29, 2016, a day that I will never forget. In the early morning hours, I received a phone call from my dad. He only said a few words, but I will never forget those words or the pain that overtook me. Within in a few short minutes of that phone call I find myself in an unfamiliar room with my family.  Not everyone in that room was blood, but they were my FAMILY. I’m sure of that. The emotions of pain were evident on every person in that room. And every adult in that room, including myself, knew that within a few minutes, a group of kids/ teenagers were going to walk in and their worlds were going to change forever. As I witnessed these kids/teenagers process the information they were receiving and the emotions run through them, I knew that although I was dealing with my own pain, that my focus needed to be on how to lift the weight of the world off their shoulders.

The next few days passed and everyone was still in disbelief, trying to process what had happened and understand how this could have happened in our family, our group. I decided to reach out to the group of kids, and started with my cousin who I told I would pick up and take the batting cage to hit some balls because he loved baseball. I realized at that moment, that although everyone grieves in their own way, the one thing we all have in common is the love of baseball. Everyone in our town had grown up playing on the same fields and that’s when the idea hit me. I immediately started sending texts and making phone calls; telling everyone to be at Underhill Park 3 PM, and saying we are going to PLAY BALL. The group text starts blowing up. Kids half my age were sending challenges, laying out the stakes, and talking more trash than I had ever heard in my 27 years on this earth. And I’ve played many different sports at many different levels, so that’s saying a lot. For the parents reading this, no worries, it was all PG, and none of them mentioned our mothers at all…

We showed up to the field and the kids were all waiting impatiently to pick teams. HECK NO, I thought, we were not picking teams after all the trash talking they did! It was time to put their money where their mouth was. We split it right down the middle, everyone under 15 on one team, and everyone over 15 on my team. I soon came to regret that decision, they not only beat us, but they held us to maybe 3 runs. I am certain that the 12 year old on the mound was throwing more heat than I was. After 2 innings I was booed off the mound, it was not pretty at all. Here I was throwing as much heat as I could muster, with no catcher (no one was brave enough without any equipment), a first baseman on crutches, a short stop that couldn’t catch a cold if he tried, and an outfield that thought it was more comical watching me try to pitch and completely forgot we were there to win. We were the Bad News Bears and playing the middle school version of the New York Yankees. The kids might as well have been on a tropical island, they brought the heat and we supplied them with the breeze. We certainly would have saved ourselves the embarrassment had we just picked teams! WHO KNEW?!

After the game, we stood around poking fun at each other, reliving the experience. Then it all of sudden hit me. From the morning of the 29th, up to the baseball game, we had all been in a daze, waiting to wake up from a nightmare. However, during the baseball game, for a couple of hours, time stood still. Our nightmare that we’ve now realized will never end, was put on hold. The world did not exist outside of that game, it was just us, together, hitting dingers. Cars driving by had pulled over to watch, families stopped to cheer us on. And to whichever kid’s dad was announcing from his police loud hauler; I really appreciate you pointing out that it was my fourth strikeout of the day. In those couple of hours for the young men whose life had changed just a few days prior, the outside world was silent. For the young adults, we had a moment of remembering what it was to be a kid again, just to enjoy the moment. A few days prior, we were dealt a life-changing blow, but in that moment on that baseball field, we had each other and together we made it count.

Seven Months after the day of the baseball game, I started the next journey in my life and no longer lived in the area. Exactly a year after the baseball game, I received a text. It was a picture of the group, playing baseball. They had come back together to play ball, they have decided to keep it going and organized the entire game themselves. Today, coming up on 2 years from the first time we played, my phone rang. It was one of the young men informing me that they will be playing baseball once again. I had to take a moment after that phone call and let it sink in. These young men have taught me courage, perseverance, determination, and most importantly loyalty. I have received texts from parents thanking me over the past few years for starting the baseball game for these boys, and although I humbly appreciate it, in return I say – THANK YOU to the young men, who have made a difference for me, this community and for each other! 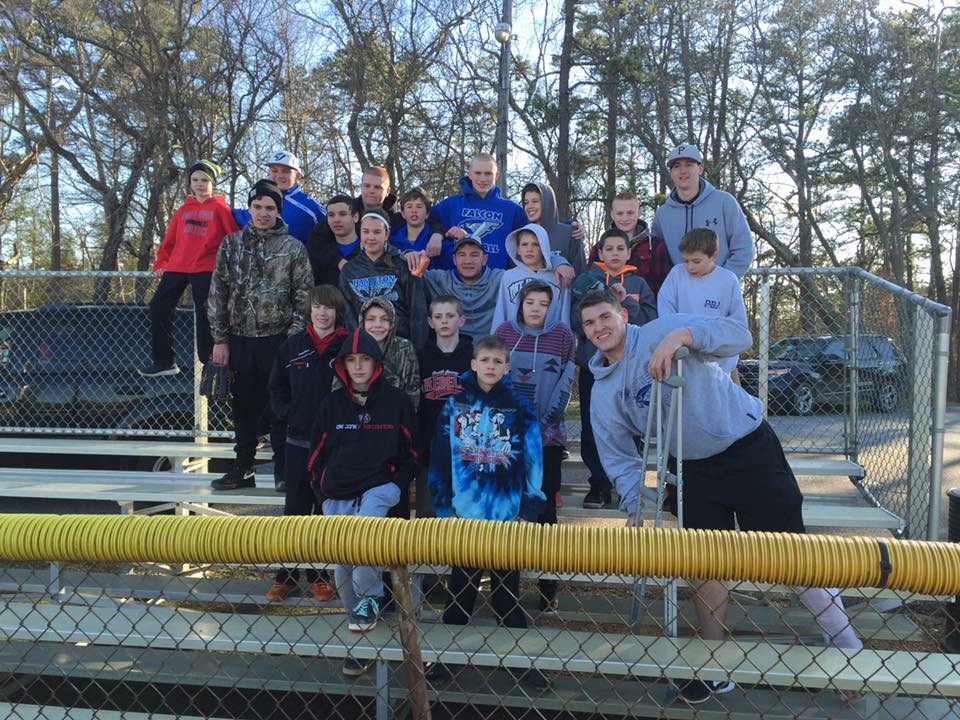 Before I close on my story I want to leave a personal message to those who played that day: When that idea came to me 2 years ago I never imagined we’d be here 2 years later not only sharing our story, but continuing hands down the most memorable game of my life. You all are changing this world for the better. You’re showing everyone watching and reading that it’s not how you fall, but how you get back up. That’s what life is all about, when it kicks you down, dust yourself off, get back in the ring and give it everything you have. In life we never truly lose, we learn. Then you take what you’ve learned, apply it, and look at all the good that is coming from this. I’m so proud to tell people to look what we are doing together, this is OUR GAME, OUR FOUNDATION, OUR COMMUNITY, OUR STORY! Do NOT be afraid, do NOT stop talking, do NOT stop sharing, and do NOT ever give up! I LOVE ALL OF YOU FROM THE BOTTOM OF MY HEART!

It’s never easy to tell what is going on inside

We are committed to the fight that will help end s

Our #SuicidePrevention Guide can be downloaded at

We have worked hard over the last several months i

Who’s ready to make summer 2021 one to remember?

We are deeply saddened to learn of the loss of our

It’s never easy to tell what is going on inside

We are committed to the fight that will help end s

Our #SuicidePrevention Guide can be downloaded at

© 2023 The Wake Up Project | All Rights Reserved | Website by PufCreativ